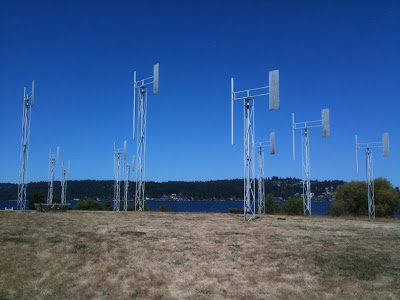 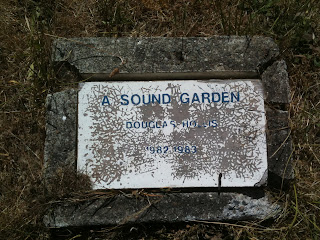 "Soundgarden," the large wind-activated sculpture that gave its name to one of Seattle's most famous rock bands, is not only in disrepair -- it's been put off-limits by the war on terrorism.
It's one of five works in the city's famed sculpture park on the National Oceanic and Atmospheric Administration campus next to Magnuson Park.
On the crest of the hill are 12 linear steel towers, 20 feet high, supporting wind-activated organ pipes. In a high wind, the bass tones generate a harmonious and unforgettable music of the elements. But now the ball bearings inside the pipes are rusty, and the music is faint at best. Besides that, the towers need to be repainted and a large searchlight tower added later should be removed, at least in the opinion of the artist who created "Soundgarden."

"I hate that light," said Hollis. "It ruins the beauty of the place." (NOAA placed it there to discourage fans of the band from climbing the towers.)
Chris Cornell, Soundgarden singer/guitarist, said he had a sentimental attachment to the sculpture even before the band was formed. "I would go to that park with my friends a lot. We would stumble on that sculpture, not knowing what it was. . . . We were sitting there going, 'What's that sound? What's that sound? Oh, it's that thing. What the hell is that doing there?' "
Lack of access isn't the only problem. Because of budget cuts and red tape, the sculptures are not being maintained. All the sculptures need work, but one that is in most trouble is the most famous: Doug Hollis' "Soundgarden," the work that inspired a Seattle band to name itself in its honor.
Cornell, the former Soundgarden musician, said the band members got a letter a few years ago "from whoever's in charge of it, and they wanted us to make a statement asking our fans to not vandalize it anymore. . . . I told them, if we make a statement like that, people are just going to go trash it.  "You have to understand rock fans. It just doesn't work that way."
Soundgarden was formed in 1984 by vocalist Chris Cornell, guitarist Kim Thayil, and bassist Hiro Yamamoto. The drummer position was originally filled by Cornell, however in 1986 Matt Cameron became the band's permanent drummer.  The band subsequently signed with A&M Records, becoming the first grunge band to sign with a major label. In 1989, the band released its first album for a major label, Louder Than Love. The band  released Badmotorfinger in 1991. The album brought the band to a new level of commercial success, and Soundgarden found itself amidst the sudden popularity and attention given to the Seattle music scene. The band's next album was to be its breakthrough. Superunknown, released in 1994, debuted at number one on the Billboard 200 and launched several successful singles, including "Spoonman" and "Black Hole Sun".
Cornell announced Soundgarden's reunion on January 1, 2010.[3]
On February 15, 2011, Soundgarden announced that they plan to record a new album, possibly to be released by the end of 2011.[4]

Tom Fisch
I'm interested in all things on two wheels, backpacking, Eastern philosophy and science. Will graduate with a MS in Sustainability from UTA, a ("Green MBA") in Spring 2012. Professional interests include: new urbanism, alternative transportation planning, and sustainable business practices.